Pleasantly Bluntly is a two-person exhibition by Kim Jungheon and Joo Jaehwan. The exhibition unfolds with a peer critique between the two artists. Minjung Misul(the people’s art) is a contested territory where two different views – one that reads it as an artistic trend or the trend of the times that took place under the context of the 1980s and another that tries to find its enduring contemporariness. The current exhibition presents new works and previously unexhibited works by Kim Jungheon and Joo Jaehwan, focusing on their present territory of being ‘working artists.’ In doing so, the exhibition attempts to overcome the symbols that have been given to the artists by the category of Minjung Misul and the limitations that entail. Through the act of speech by the two artists, Pleasantly Bluntly shows different aspects of the artists who have been engaged as critical colleagues for over 40 years. By inviting comments by their potential fellow artists (Kang Sindae, Lee Woosung, and Hong Jinhwon), the exhibition also tries to find a possibility of contact between the two artists and other artists in a different generation. In this way, it attempts to overcome the limitation of Minjung Misul that is being historicized or becoming an established legacy in the Korean art history. At the same time, the exhibition explores the possibility of the relationship of being critical colleagues to each other, presented under the themes of ‘maintaining one’s practice’ and ‘the strength of colleagues that makes it possible for one to keep one’s practice.’

Looking back at the recent past is tedious labor. For example, reviewing the art of the recent past called the 1980s is a weary business. Here and now, the 1980s is merely being reproduced as dominant discourses and images. For this reason, working artists from the recent past are deprived of their being in time in between the frames of documentation and commemoration such as archiving and the celebration of anniversaries. As much as they are called as master artists or living histories, they become subordinate to the irony of the increase in their commodity value. Because they are already inscribed in history, they are infinitely drawn to the names of authority, power, and establishment. Questions that are deemed not to meet the values of contemporaries fall into outdated thoughts. As soon as they become symbols, they become transparent. They inhabit in the isolated chamber as if they do not exist, bound to the roles of concession and prudence that are originally reserved as befitting properties of the past. Then, wouldn’t it be possible to find in them the contemporariness in them the contemporariness that is demanded by the present moment?

Nietzsche wrote in Untimely Meditations(1873~1876), “This essay is also out of touch with the times because here I am trying for once to see as a contemporary disgrace, infirmity, and defect something of which our age is justifiably proud, its historical culture. For I believe, in fact, that we are all suffering from a consumptive historical fever and at the very least should recognize that we are afflicted with it.” Here, depending on how one reads the ‘historical culture,’ the methodology of contacting with those who struggled in the recent past also changes. For example, if one interprets the ‘historical culture’ as a field of popular struggle for democratization, those who struggled in the recent past become beings that contain a defect of suffering from ‘a consumptive historical fever.’ However, if one considers the ‘historical culture’ as a snobbish world that derives from civilizations and accelerates by itself, the thoughts presented by those who struggled in the recent past present through their work become quite contemporary.

Everyone can have one’s own perspective, but if one has to be with others, how can it be done? The current exhibition, Pleasantly Bluntly, considers a possible answer to the question with a device of ‘peer critique,’ done by the two artists born in the 1940s – Kim Jungheon and Joo Jaehwan. The two have been working as colleagues for almost 40 years since they first met in the collective Reality and Utterance in 1979. The oppositional ego, experienced by the contemporaries in the Minjung Misul group during the 1980s, was manifested in the form of social solidarity such as the struggle for democratization and labor movement. Although Kim Jungheon and Joo Jaehwan may have seen each other’s work as foreign languages, they had the same direction with regards to the meanings of their works. By the way, can we call the recent works by the two artists as works of Minjung Misul? Probably not. It is because Minjung Misul does not originate from individual artists from the period; it departs from ‘the moment in time.’ Both artists have been continuously exploring the issues raised by ‘the present’ that we easily name as ‘the contemporary.’ For young artists, things are the same. They only differ in terms of how they think about those issues and through which path they have been developing their thoughts.

In this exhibition, ‘comments’ are inserted as a device to rethink peer critique with artists with different histories of thinking about those issues. And Kim Jungheon and Joo Jaehwan talk to each other. The two call each other as ‘Mr. Joo the elegant’ or ‘distinguished elegance.’ What can be said about such mutual support for their colleagues? The word ‘pleasantly’ is given to Joo Jaehwan by one curator to describe him. ‘Bluntly’ is also a word given by an artist to Kim Jungheon. Strangely enough, these two words have constantly been used to describe the two artists and also mentioned by other artists around them. The point at which these words become a critique is not when they are spoken but when they are mentioned by others. For this to happen, Kang Sindae, Lee Woosung, and Hong Jinhwon take part in the exhibition as commenters. They provide a critical language, which might be laborious yet worth trying, to the two artists; they ask the two artists about what they feel curious about as artist colleagues; or they re-edit the words about the two artists that have been already in common use. Kang, Lee, and Hong say that they are clearly indebted to the two artists. Nevertheless, their comments do not start from any intimacy nor praise.

If one is convinced that their comments are perceived as symbolic devices as such by the two artists, it is highly likely that the estimation is wrong. If that is the case, what would the destination of the comments made by artists that take part in this exhibition as commenters? It is believed that artists present aesthetic sensibility through their work, and those who perceive the sensibility can try to explore the possibilities of shifting into new subjects. However, all of this is not something that is suddenly presented by a single artist who in one day discovers a new sensibility that will captivate everyone. Perhaps, suggesting certain sensibility and gauging certain possibilities by perceiving the sensibility is something that starts from the peer critique. Peer critique is not about exposing the destitute. Rather, it is what makes artists’ uncertain life and incomprehensible creative labor become a process of elevating each other. Finding a place for criticism is an attempt to find a missing link between ‘the recent past’ and ‘now,’ and it is also an effort to find a place for one’s colleagues. In the end, the current exhibition shifts the question “Why one continues (creating works)?” into another question “How to continue (one’s creation)?” In doing so, the exhibition traverses artists in different age groups and different historical periods. 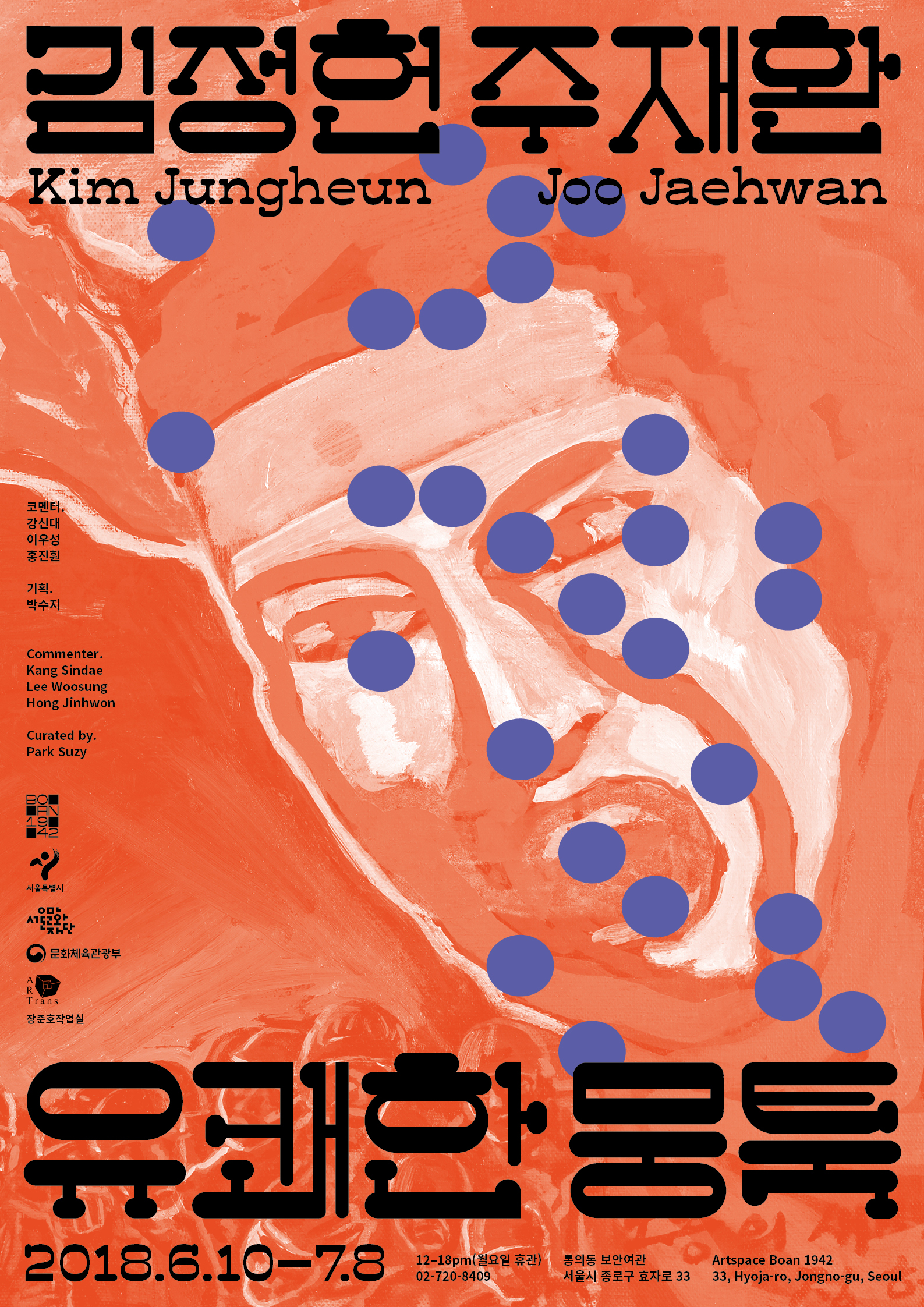 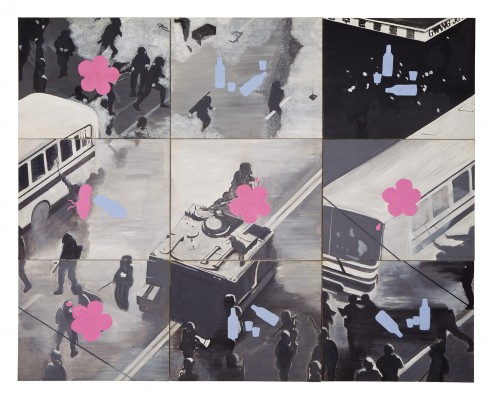 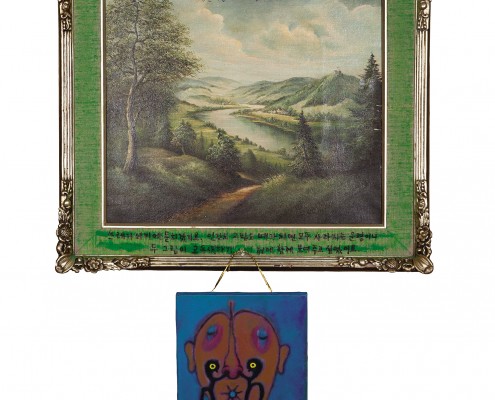 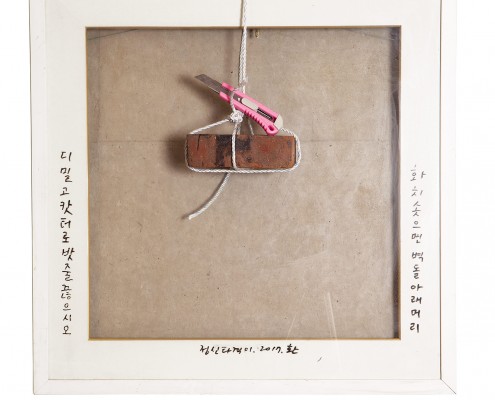 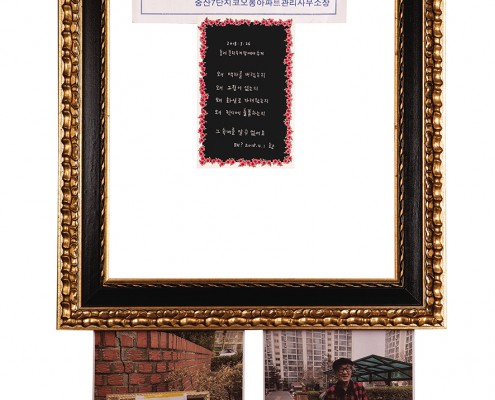 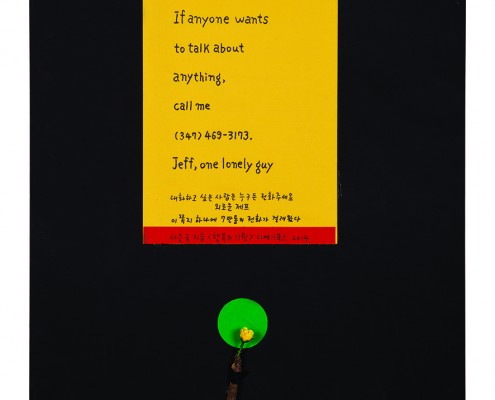 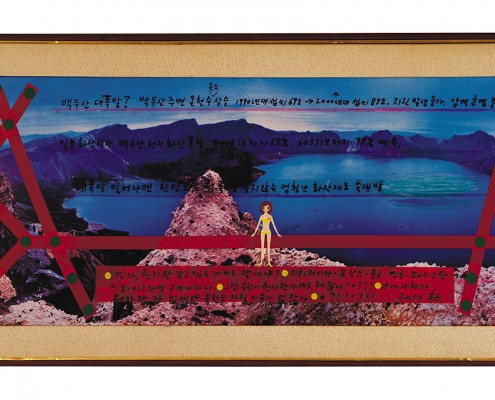 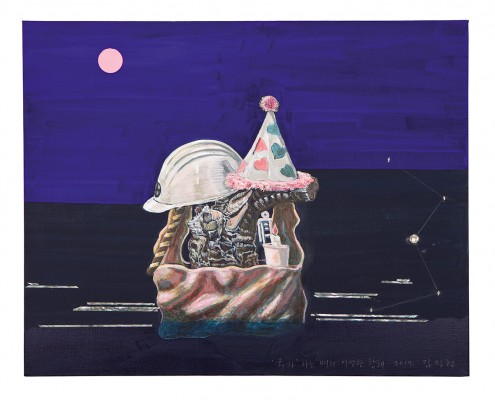 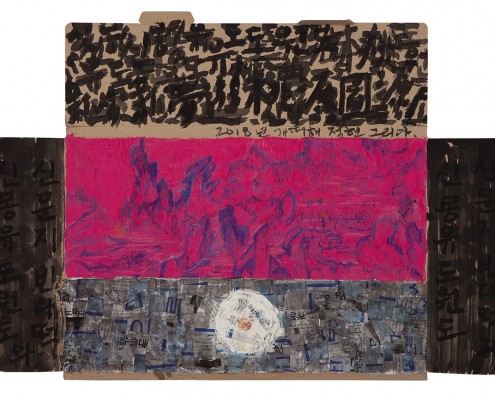 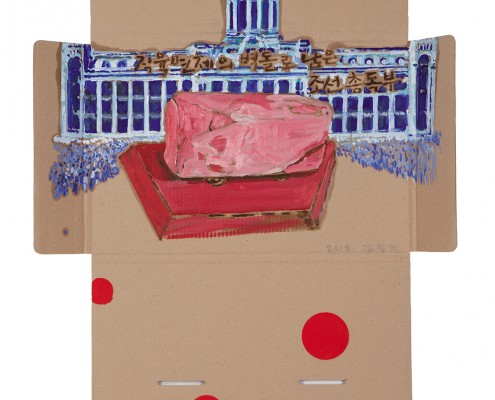 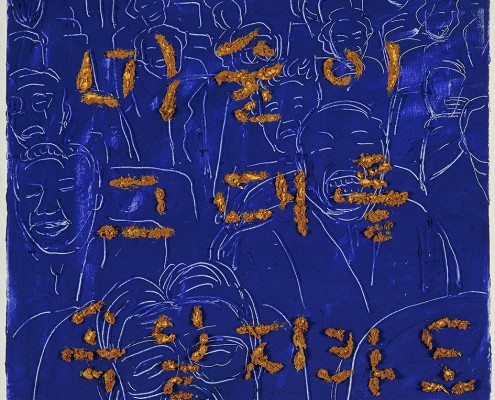 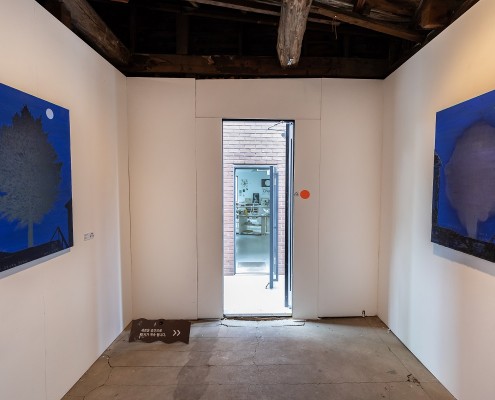 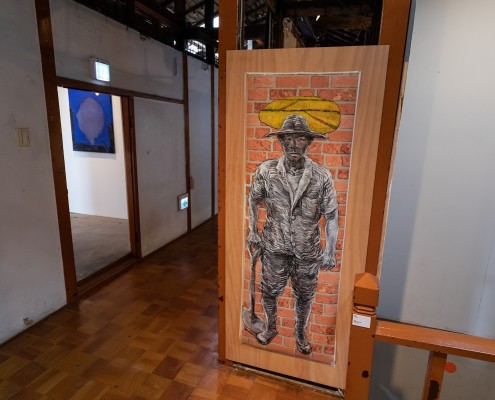 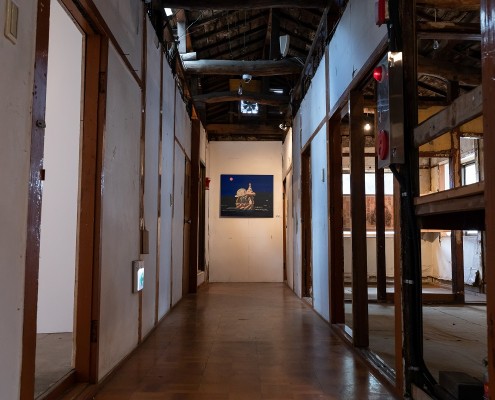 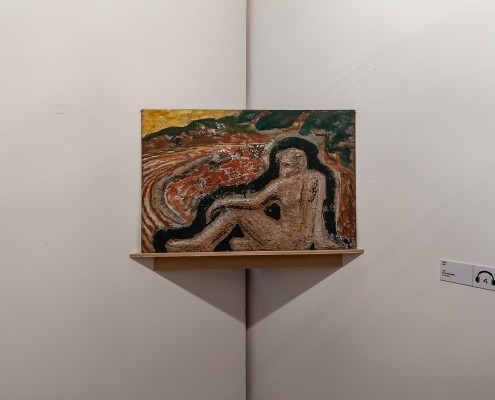 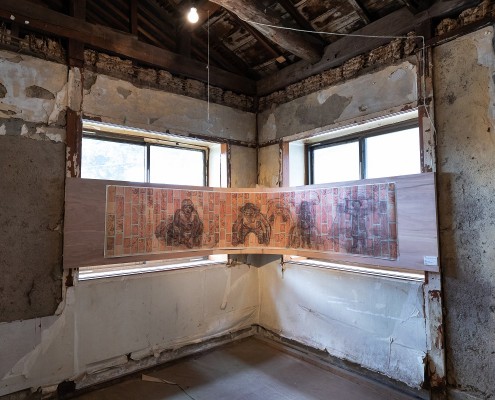 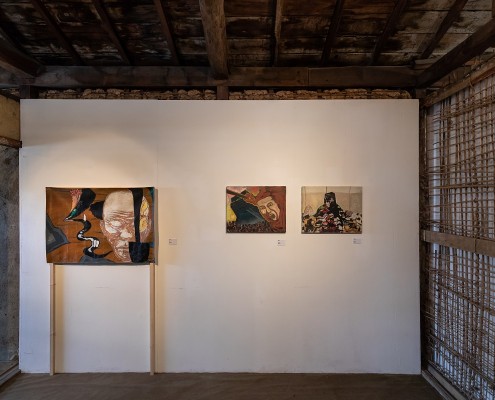 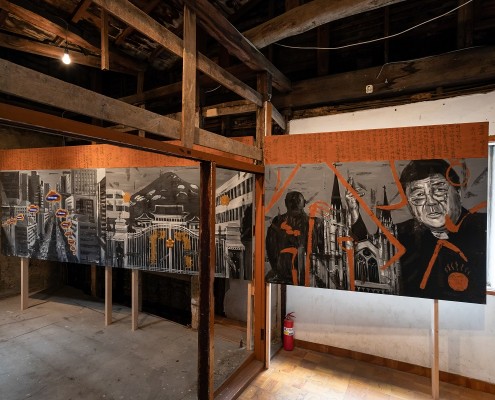 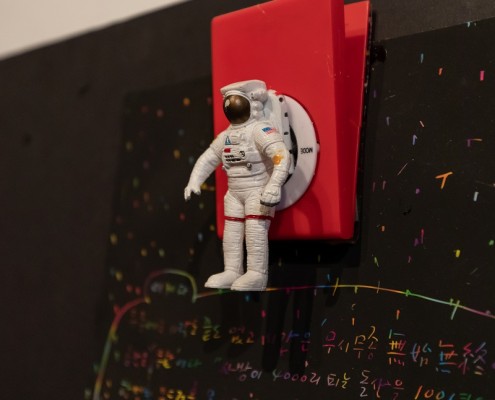 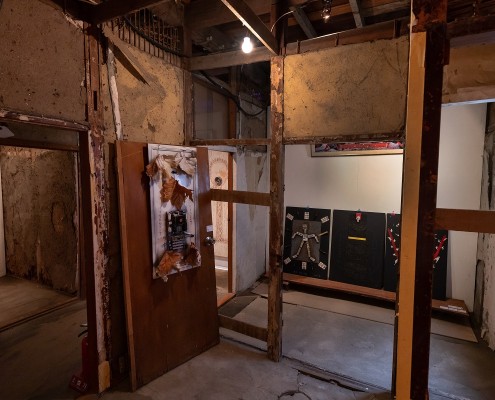 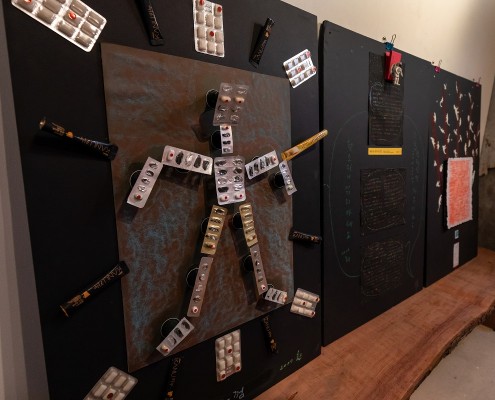 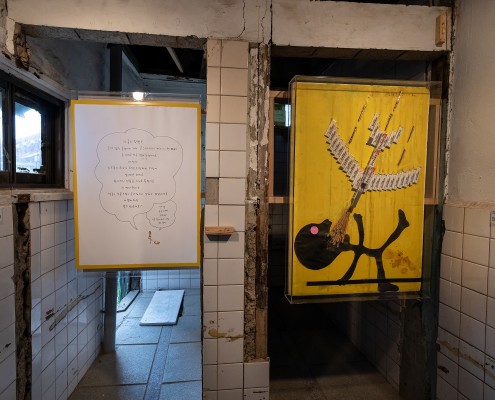 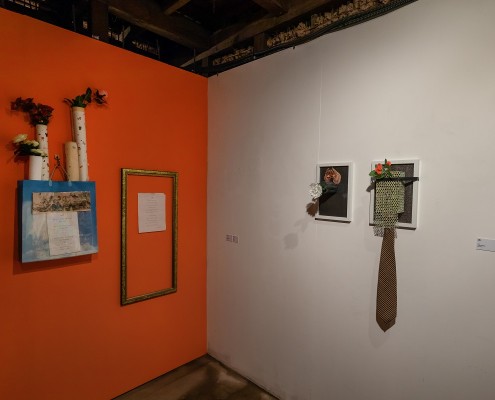 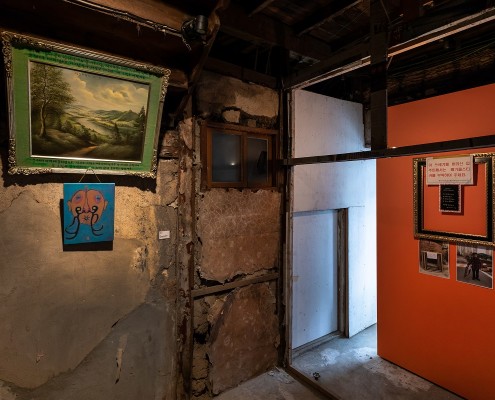 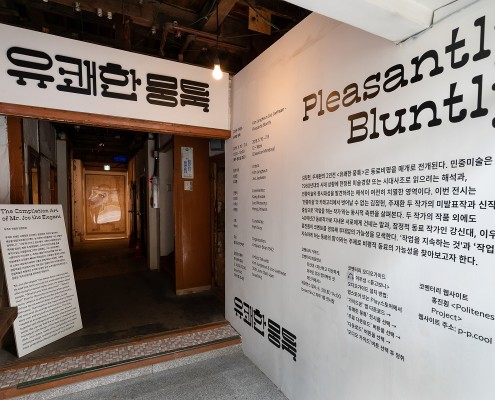 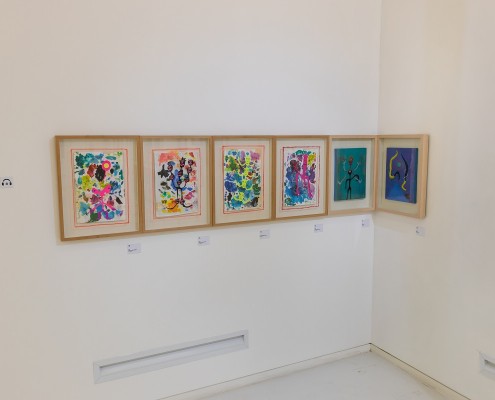 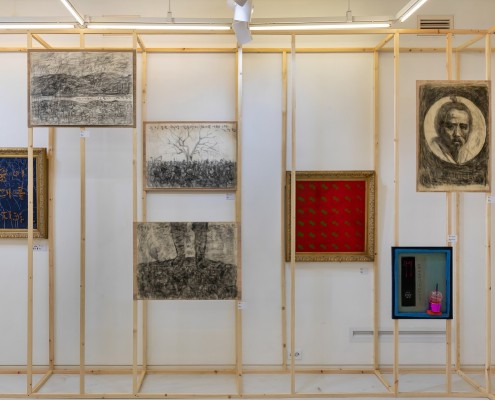 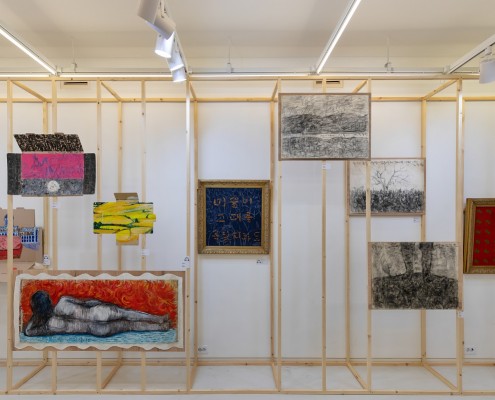 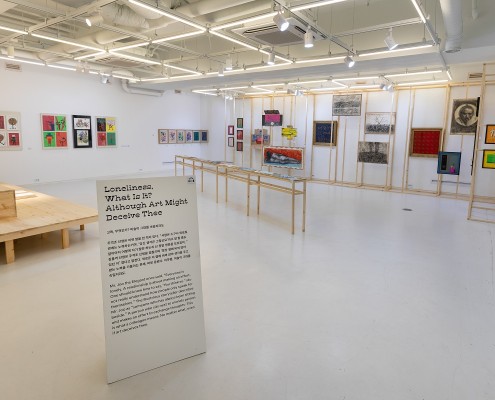 Kang Sindae, Lee Woosung, and Hong Jinhwon are participating in Pleasantly Bluntly as commenters. The three young working artists provide a commentary on the exhibition as a way of making a critique. The commentary can be performed by the three artists at the exhibition, and it can also be presented through a website where the existing words and expressions about Kim Jungheon and Joo Jaehwan are collected and linked to each other. Kang Sindae, Lee Woosung, and Hong Jinhwon will also provide guided tours, practicing a peer critique by themselves. The commentary by the three artists does not rely on grand narratives nor quoted references. Rather, it works as a language of potential colleagues. At the same time, it does not function as a unilateral provision of information: It operates as a device capable of interacting between artists and artists, artists and works, works and the curating, and the exhibition and its viewers. It is hoped that the commentary will remain as a common language, not only for the viewers but also for the participating artists.

Kang Sindae focuses on the new works by Kim Jungheon and Joo Jaehwan. Kang invites fellow critics to the exhibition and stages a commentary performance. With the performance, Kang builds a critique that is serious, tedious, and laborious at the very site of the exhibition. To approach the exhibition with a degree of seriousness while not observing the social hierarchy of criticism, the performance intentionally excludes the background of Minjung Misul. Excluding the timeliness of a work and reading it from a synchronic perspective is also an attempt to question a work that stands between the aesthetic and the political.

Lee Woosung asks questions from a position of a painter that questions other painters. For Lee, Kim Jungheon and Joo Jaehwan are considered as a kind of classical figures. Rather than asking questions about the meanings and intentions behind the two artists’ works and Minjung Misul itself, he asks the invisible process behind their works, ways through which they create their paintings, and issues that entail their lives as artists. The viewers are invited to listen to Lee’s questions to the two artists – Kim Juengheon and Joo Jaehwan – as they walk through the exhibition.

Hong Jinhwon develops a programmed ‘bot’ that collects and archives information about the works by Kim Jungheon and Joo Jaehwan, available on the Internet. The bot continues collecting data during the exhibition period, and Hong selects what is considered as meaningful among the collected data. It is a question about whether making comments on someone’s work helps anyone understand it. The bot turns any collected information into data, regardless of whether it is a critical essay by a critic or comments posted by exhibition viewers. In this way, it suggests a way to present comments on a work of art in a horizontal manner.